CIMT Ultrasound: A Window to Your Arterial Age 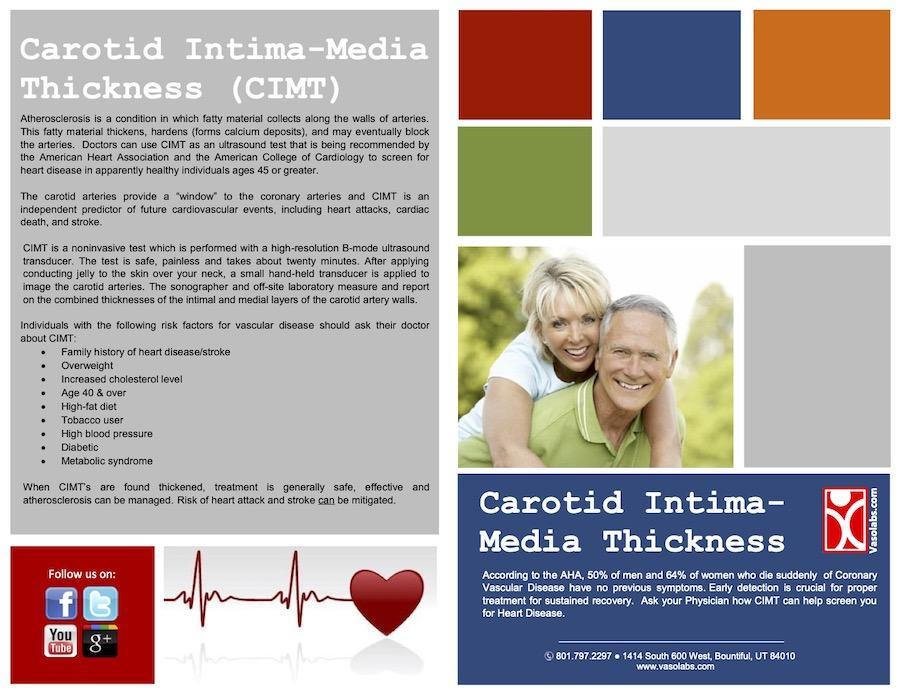 Cardiovascular disease (of heart and blood vessels) is still one of the leading causes of death and disability in the United States.  What are the risk factors for heart attack or stroke?   In what way can we quantify or measure these risk factors?    What are the testing methods that are available for us?

CIMT testing, or ‘carotid intimal medial thickness’ testing, is a new and powerful approach that is simple to administer, involves non-ionizing radiation, and is 88-92% correlated with cardiovascular disease – much more accurate than most commonly used baseline cardiovascular tests today.

Briefly, an initial comprehensive cardiovascular workup might include some or all of the following:

Then, these would be followed by a very comprehensive cardiovascular biochemical panel to include, at a minimum:

The list grows each year.   The current cutting-edge approach is measuring total numbers of LDL particles rather than LDL concentration.

But traditionally the only valid correlation between all these risk factors and the true development of coronary artery (heart vessels) has been coronary angiography angiography. This is where a large catheter is inserted into the femoral (groin) artery, snaked retrograde through your aorta into the heart visualizing your coronary (heart) arteries. This is fraught with many complications including bleeding and too many unnecessary procedures such as stents.   The basic sentiment has been, “while we’re here we might as well do something.”  Now, coronary CT angiography can replace a diagnostic catheterization at a much lower risk in most patients. If you do not qualify for a coronary CT angiogram, which is most of us, then an alternative assessment of artery aging that is safe, accurate, backed by a large number of top quality science studies, and can be performed over and over is most desireable.

Clearly the variety of traditional and non-traditional risk factors at play makes this a complex puzzle: so what does CIMT testing add to this conversation?

CIMT testing, which is FDA approved and matches actual real disease not population based statistical probabilities.  It measures your own individual risk.  It looks at vascular plaque development and the arterial wall thickening that correlates with arterial disease.

Imaging is all about visualizing actual disease or dysfunction and then reconciling it with a set of traditional cardiovascular risk parameters.

Other advantages of CIMT testing include the following:

This type of testing is useful because a patient could have totally normal cholesterol values with developing disease; on the other hand, a patient could also have high cholesterol with no evidence of vascular disease.  That is what we aim to prove and show to you.

What the Actual Imaging Shows

The testing starts with ultrasound plaque identification followed by the measurement of the two inner layers of your carotid artery:  the very thin intima (inner lining) + media (muscular layer of the artery).  You can see by the diagram below that increasing thickness is associated with increasing disease of the artery.

The thickening yellow portion of this diagram illustrates increasing inflammatory response. It is a progressive accumulation of white blood cells and inflammatory cells.  Cholesterol participates in this process. But it is not the cause of the disease.

In a most graphic sense, it represents an abscess of your arterial wall.  At the end of this progression the thin fibrous cap ruptures.  This rupture is followed by an immediate aggregation of platelets, which forms a clot.  This clot (thrombosis) = heart attack or stroke.

The goal is to identify the early stages of this process, not the late stages. That is your primary interest – identifying early disease and preventing the progression to late stage catastrophe.

It also incidentally measures progressive changes that results from high blood pressure. It has an 88-92% correlation with heart disease — the coronary arteries.

What To Expect: The Final Image

After a brief exam, here’s an example of what the results would look like (image below).

You will see the cross section looking for plaque and the longitudinal section as shown above to measure the CIMT width.   Flow rates can also be included as a traditional measure looking for any signs of obstruction to vascular low.   This is based on Bernoulli’s principle that smaller and smaller diameters of a pipe (artery) have increased flow rate, so that conversely low flow rates are diagnostic of clear open (patent) carotid artery. You measurements are compared to a large database matched for age and gender to determine your actual Artery Age.

Now, knowing how powerful, safe, and easy a CIMT examination is, schedule your CIMT ultrasound at the Kahn Center for Cardiac Longevity by calling 248-731-7412. To health!